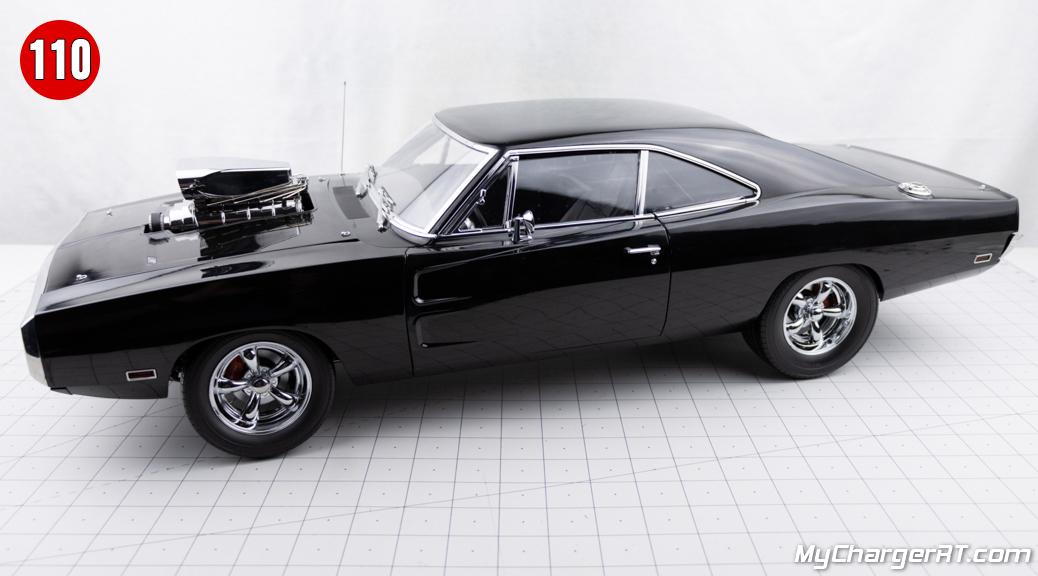 “In this assembly session you will attach the struts of the chassis. You will also install the antenna and the air
intake of the supercharger.“ 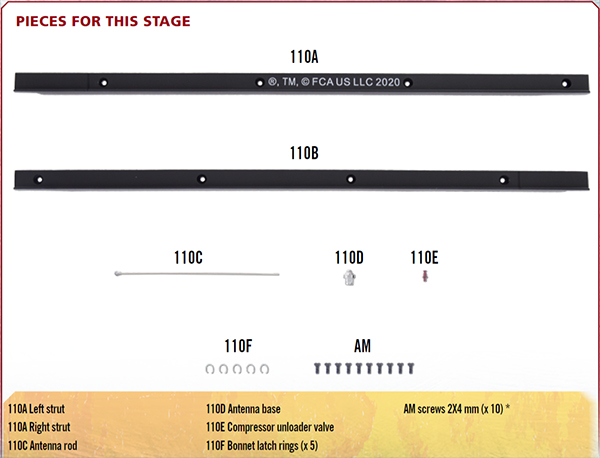 Materials: The Struts, Bonnet Latch Rings, and the rod of the Antenna Rod are metal, but the rest is plastic.

Retrieve your Charger and carefully turn it upside down on a soft cloth. Then, fit the Left Strut to the underside of the Chassis below the left door as shown, and secure it into place with four (4) AM screws: 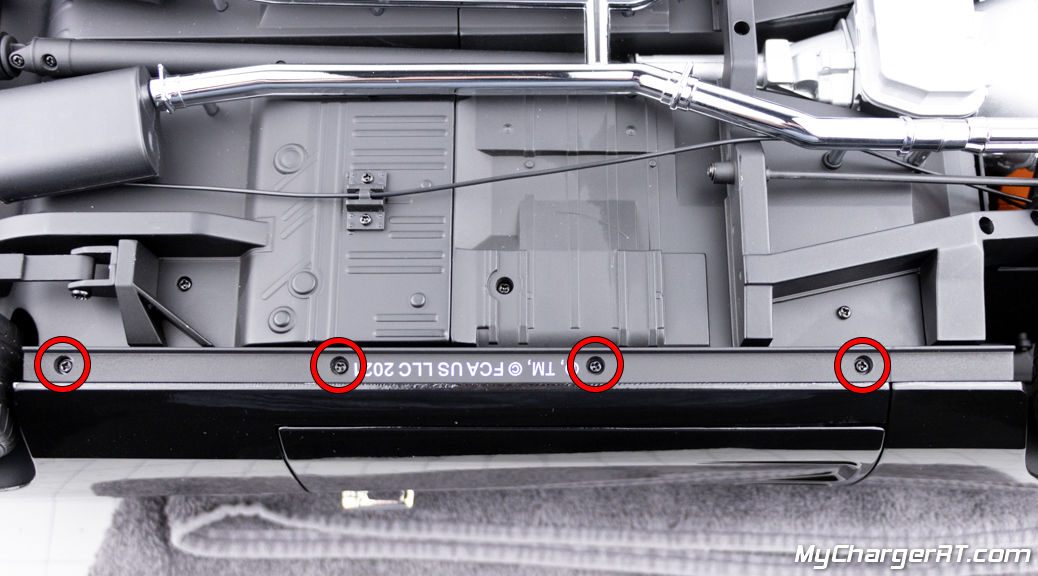 In the same way, fit the Right Strut to the underside of the Chassis below the right door as shown, and secure it into place with four (4) AM screws: 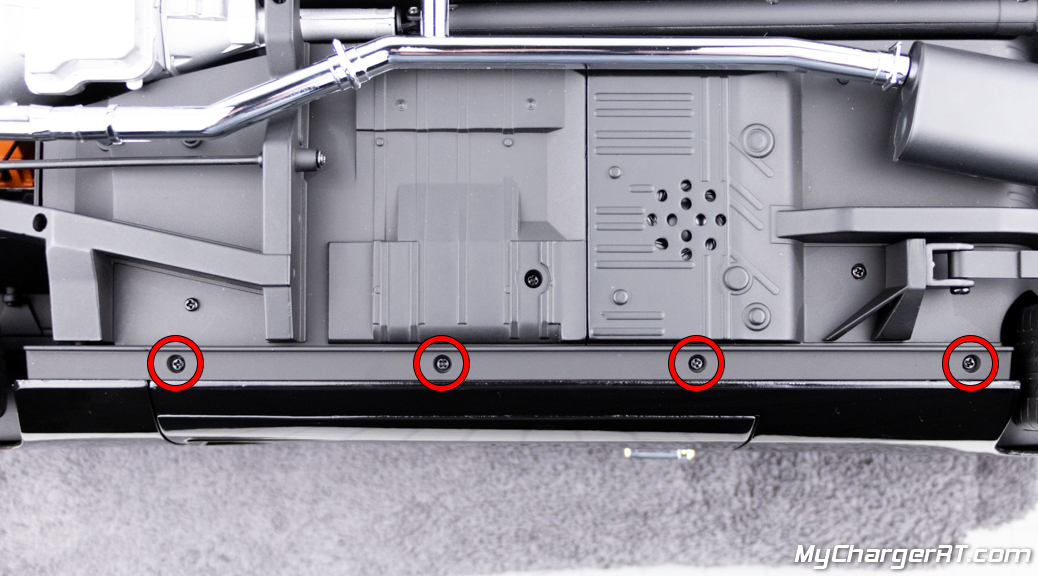 Retrieve your Bonnet (Hood) assembly and place it over the engine opening in the Body, as shown. The front and rear Bonnet Safety Latches (silver pins) should fit up through the holes in the Bonnet.

My hood did not quite sit flat, so I needed to gently bend it a bit to sit down better: 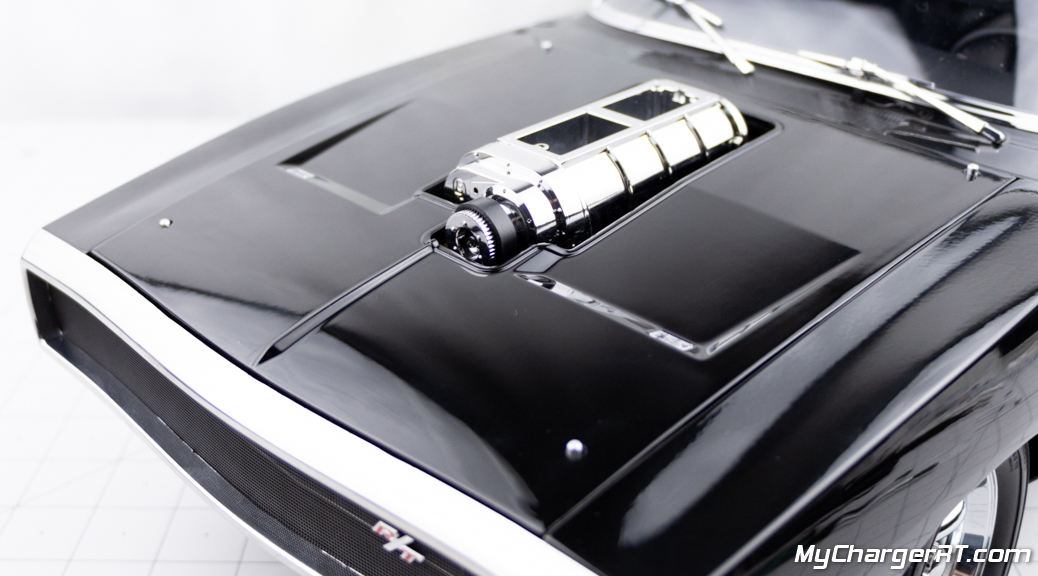 Insert a Bonnet Latch Ring into each of the four Bonnet Safety Latches.

You may want to use some tweezers and needle-nose pliers here to make things simpler. I did need to spread the ends of the seals apart first so they would fit into the latch holes, hold them in place with tweezers, and squeeze the ends back together again with the pliers.

NOTE: If you want to be able to easily remove the hood later on to display the engine, you should NOT install these rings: 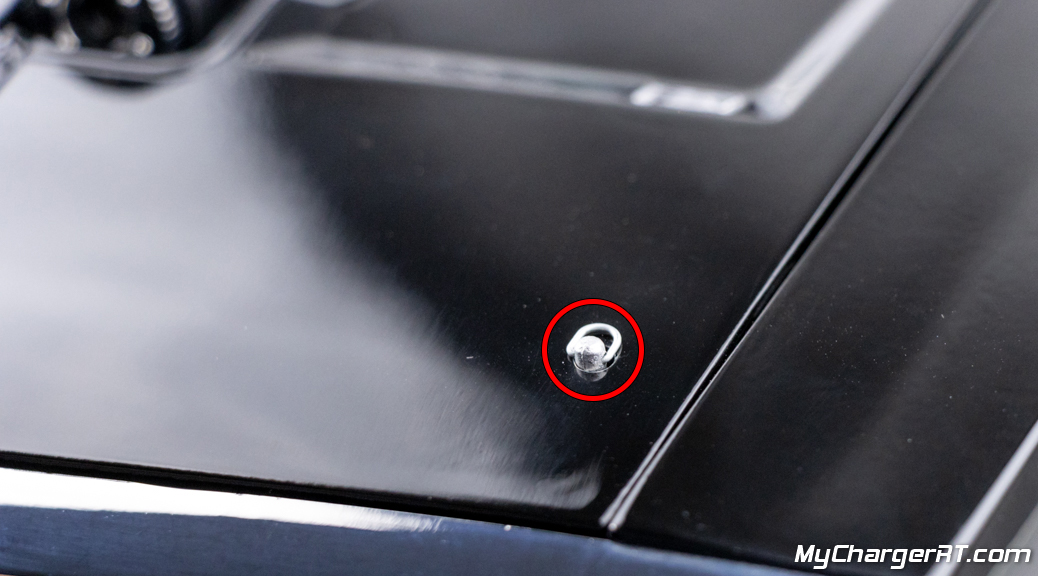 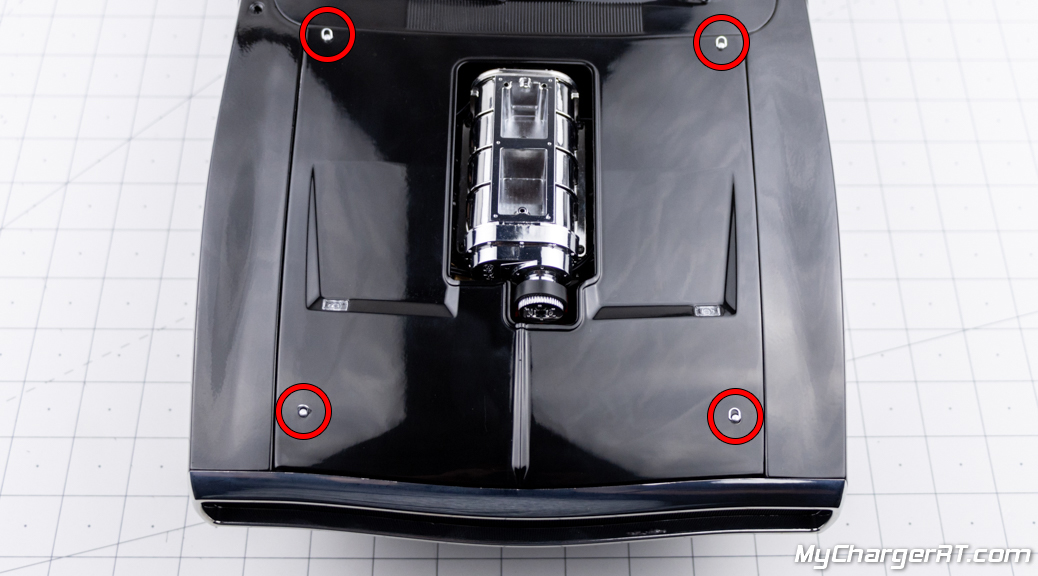 Press the D-shaped post of the Antenna Base into this matching hole of the right fender: 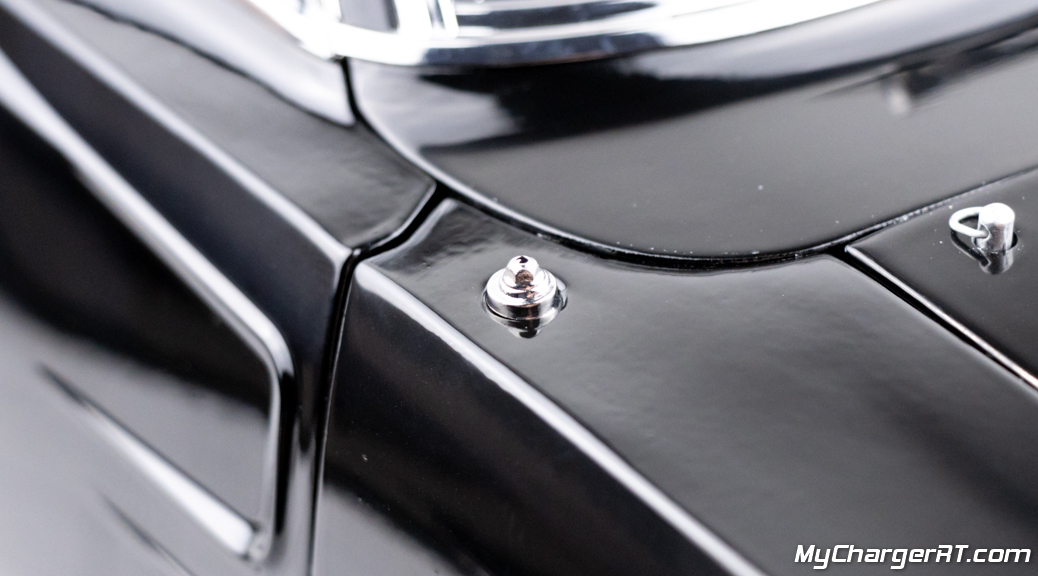 I was really hoping this would be able to slide down inside the fender so could be ‘retracted’, but it does not. I suppose we could cut the metal rod down to make it look retracted, but I left it alone: 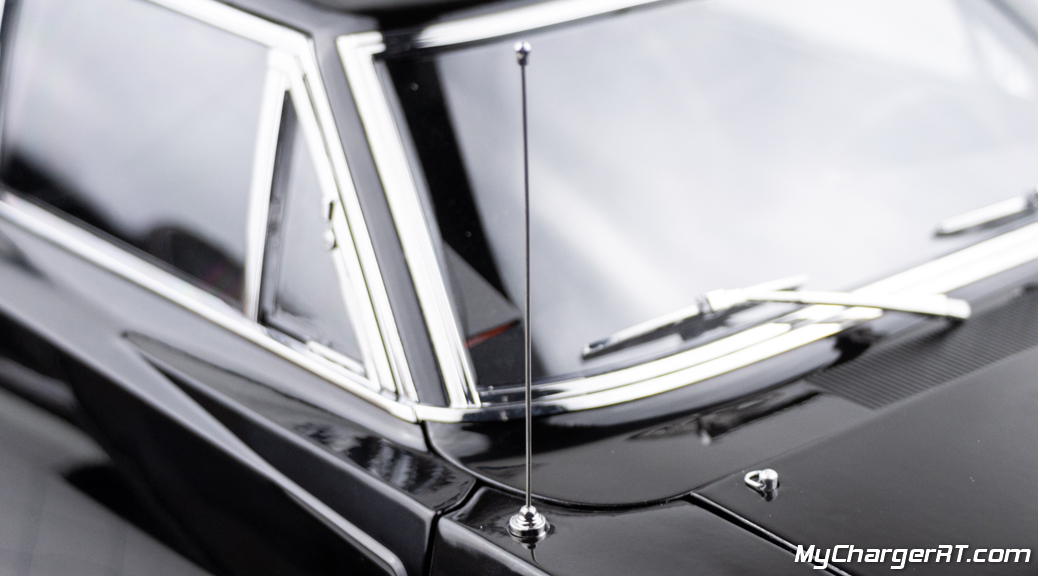 Press the peg end of the Compressor Unloader Valve into this hole at the front of the supercharger Pulley Spacer.

NOTE: If you want to be able to easily remove the hood later on to display the engine, you should NOT install this valve: 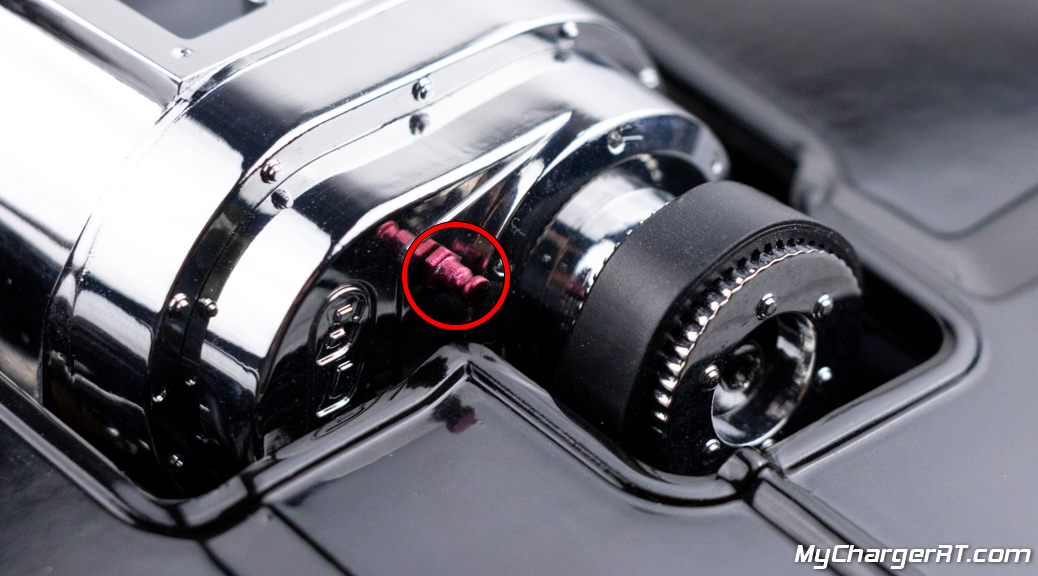 Retrieve your Air Intake assembly and slide the three pins on the bottom of it into the matching holes of the Injector Plate, as shown: 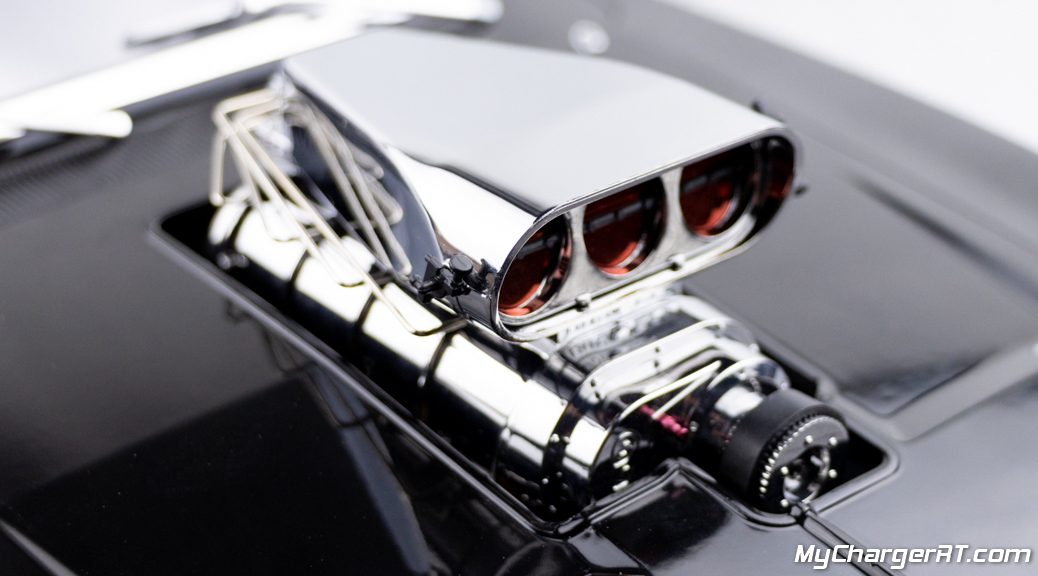 Retrieve your Stands for the Chassis (from Stage 47) and place them under the car and between the wheels.

I do not use these stands. It is believed that they keep the weight of the car off the rubber tires so they will not develop flat spots. Also, they make it so turning the front wheels with the Steering Wheel does not damage any steering components. Using them is totally up to you.

Can you believe it, our Charger R/T build has reach the end! I love how sharp it looks with the jet black paint. There were some struggles along the way, but I am happy we made it through and that you were able to join me for the entire journey!