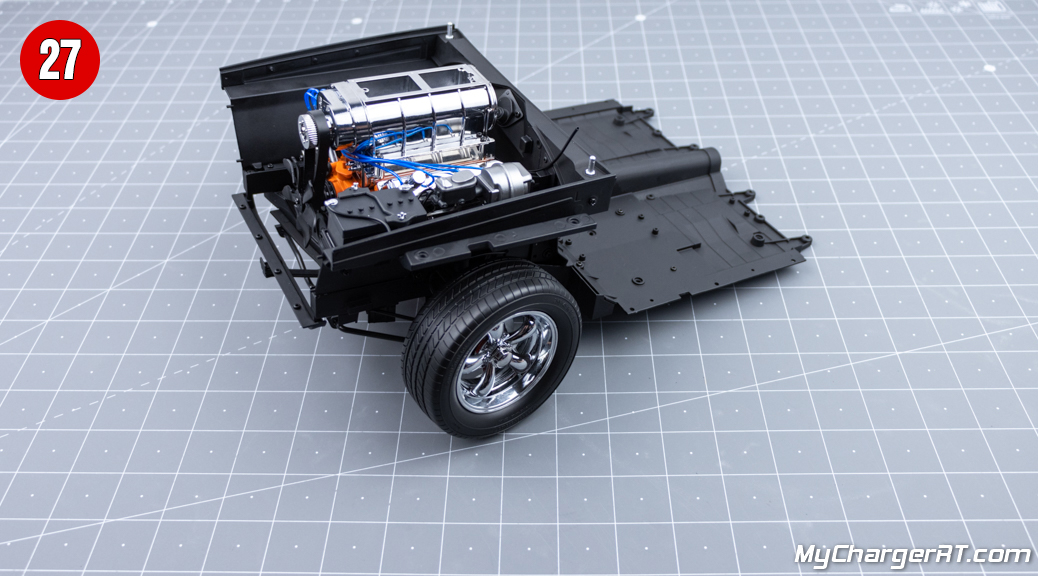 “In the following assembly session you will attach the firewall and the side panels of the engine housing to the chassis.”

Attaching the Engine Housing to the Chassis

Retrieve the Firewall assembly from the previous stage. Press the pins of the Voltage Regulator into these matching holes of the Firewall:

Secure the Windscreen Wiper Motor to this location on the Firewall with two (2) CM screws.

This is your friendly reminder to try using 3-in-One Oil on all screws going into metal:

Connect the free end of the battery Positive Cable to this pin on the Voltage Regulator:

Flip this entire assembly over. Fit the two tabs of the Front Left Wheel Arch Reinforcement Plate (marked ‘L’) over these matching posts of the Left Panel assembly. Secure these together with two (2) AM screws:

Do the same on the other side with the Front Right Wheel Arch Reinforcement Plate (marked ‘R’) and two (2) more AM screws:

While holding the engine housing assembly in place, turn the entire chassis over and secure these together with four (4) AM screws:

Connect the free end of the Alternator Wire to the remaining pin of the Voltage Regulator:

Locate the two loose brake Hoses (26H) attached to the Connector, and slide them over the pins of the Master Cylinder, as shown:

Detach both front wheels by removing the Hub Covers, IM screws, and Washers holding them in place:

Secure the rear two holes of the Front Right Suspension Dome to the Right Panel assembly with two (2) AM screws:

On the left side, repeat the previous step with the Front Left Control Arm Anchor Bolt (marked with ‘L’) and one (1) NM screw at the front and the two (2) more AM screws at the rear. Make sure the suspension arm is resting on top of the tab on the anchor bolt, as shown:

Finally, don’t forget to add two (2) CM screws into these holes to secure the steering box:

Reattach both front wheels, using the removed Washers and IM screws. Finish them off by replacing the Hub Covers:

MOM: Let’s say it together, Hoses!  We need them, they add so much to the car, and yet, we are to maneuver them in tight places without undoing what we’ve already done?!  Challenge accepted and conquered!  I love how this build is coming together!!  All parts in this state are metal. The two Mount Brackets for the Crossbar will not be used until Stage 30, so keep them safe for now.