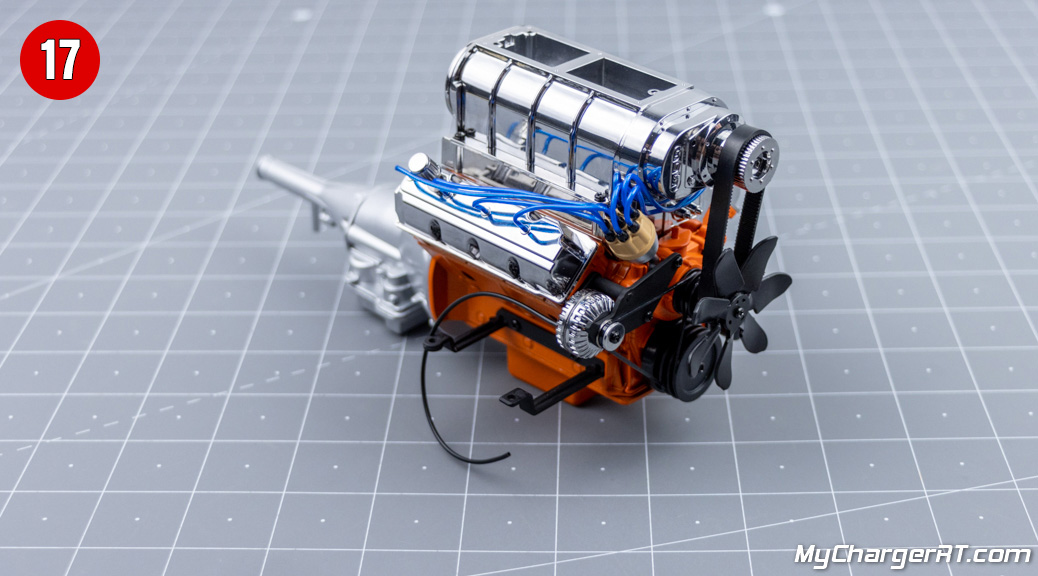 “In this assembly session, you will install the alternator with its pulley and belt, the crankshaft pulley, and the supercharger and water pump belts.” Fit the post and smaller pin of Alternator Piece 1 into the matching holes of Alternator Bracket 1, as shown. Secure with one (1) AP screw: Secure the bracket to the engine with one (1) CM screw (circled in red below).

Take note of this small pin as well (circled in yellow below). This will be used in the next step. This is also your friendly reminder to try using 3-in-One Oil on all screws going into metal: If this bracket does not line up with the two holes in the water pump, try adjusting the Alternator Bracket 1 from the previous step: We built this pulley on the work surface, then put it on the engine. These are all the parts in order. The Crankshaft Cap (nearest the engine) is on the left: Next, stack the two Crankshaft Pulley (Piece 2) on top of the Crankshaft Cap, like this: Slide this entire assembly over the large bottom post of the Timing Cover, as shown, and secure all of these in place with one (1) CM screw: From the side, this is how the mounted pulleys should look: Fit the larger Alternator Belt around these three pulleys, using the second groove of the fan/crankshaft pulleys as shown:

MOM: We used tweezers to ensure the belt didn’t twist while placing it on the grooves of the pulleys. Fit the smaller Water Pump Belt around these two pulleys, as shown: Fit the toothed Supercharger Belt around these two pulleys, as shown: Secure the Cooling Fan assembly to the Fan Sprocket as shown, with one (1) AP screw: Slide one end of the Alternator Wire over the pin on the back of Alternator Piece 1: MOM: Another fairly painless stage done and the engine is beautiful so far! I especially love the color of the spark plug wires – could be because I am partial to blue.