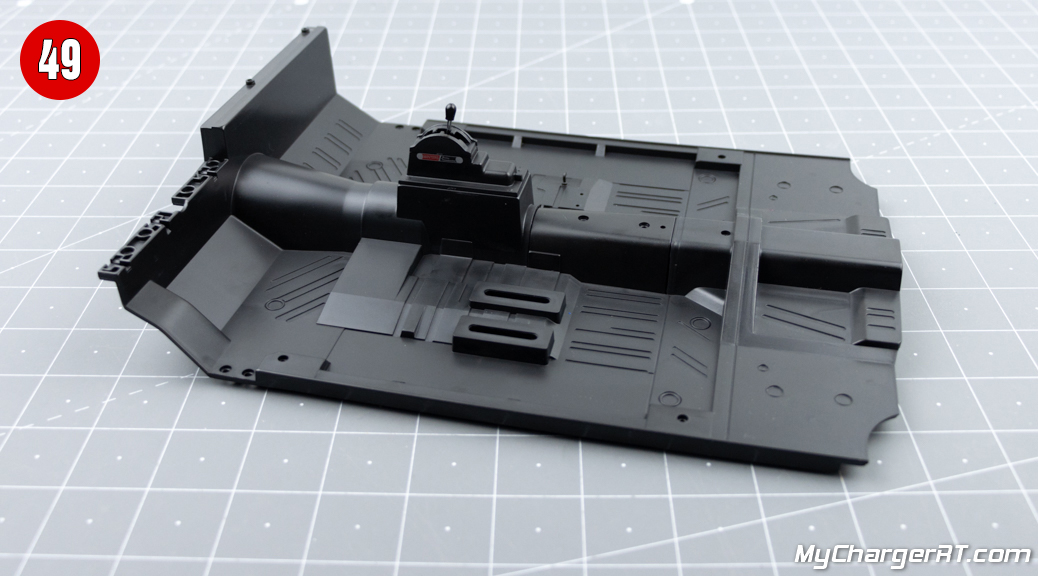 “In this assembly session you will connect the wires of the brake light, headlights, and rear lights to the electronic control unit. You will then perform a simple test to check that the lights work properly.”

That is what it says in the instructions for this stage (incorrectly). In this stage, we will assemble the shifter and center console. 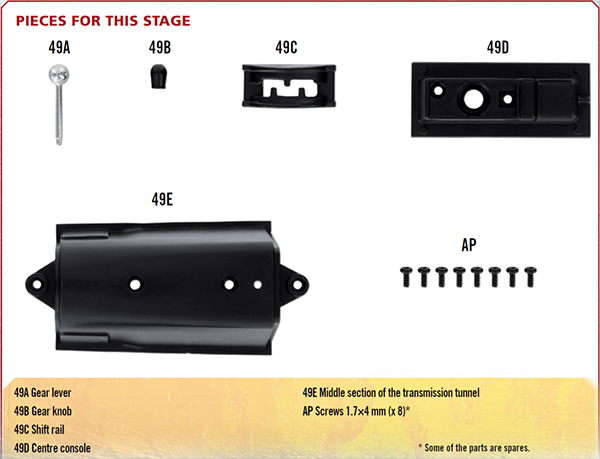 Materials: The Gear Lever is chromed metal, but everything else in this stage is plastic.

Place the Shift Rail on the Centre Console, aligning the pins and screw holes as shown.

The image in the instructions has this part backwards, but it only fits correctly one way. And, this way matches the real car: 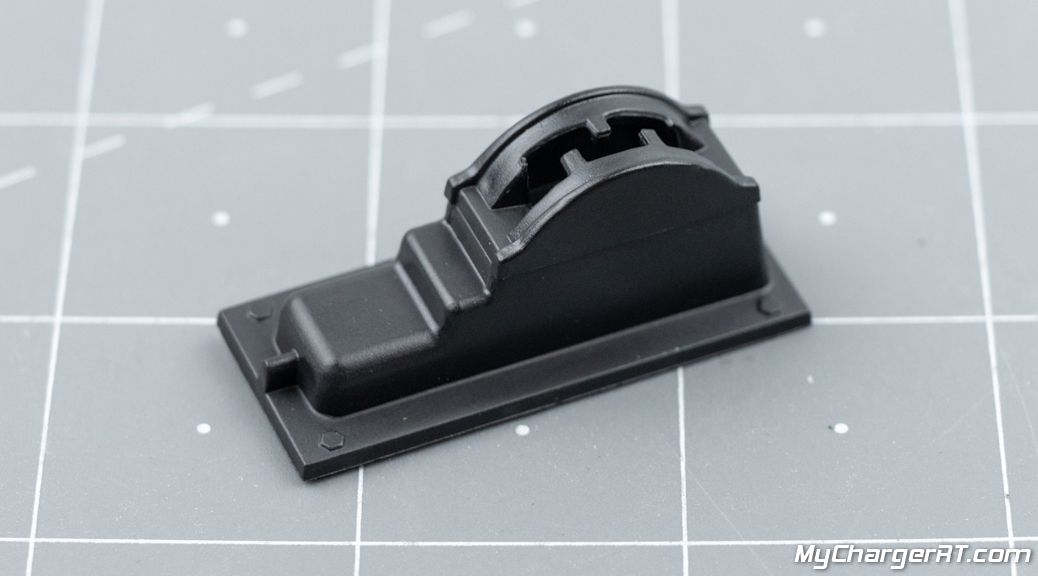 Secure these parts together from below with two (2) AP screws: 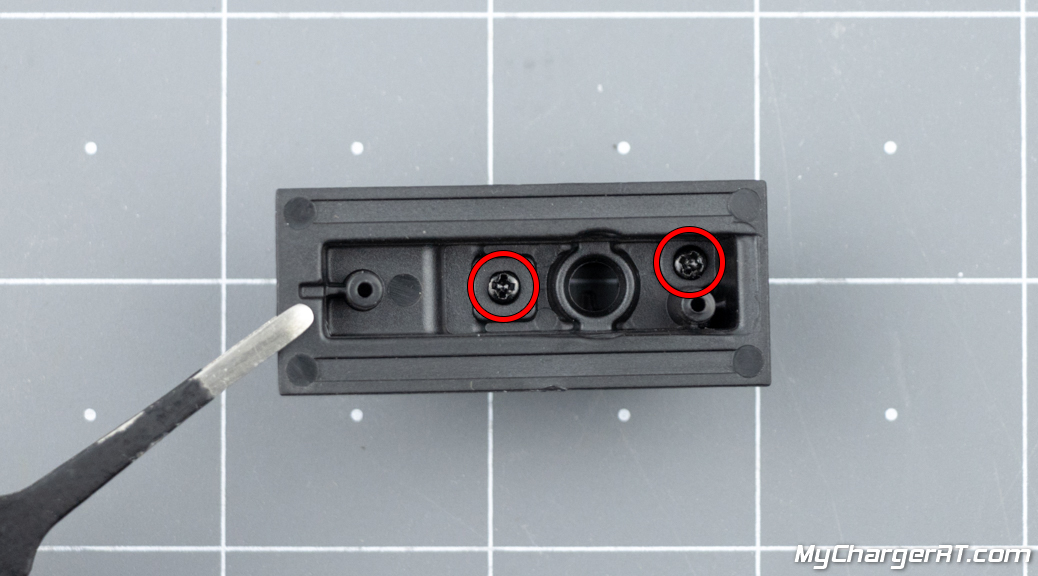 Feed the thinner end of the Gear Lever through the large hole in the middle of the Centre Console from below, as shown.

The ‘ball’ end of the Gear Lever should sit in the rounded recess and will be loose until we attach this console to the Floor Pan in a later step: 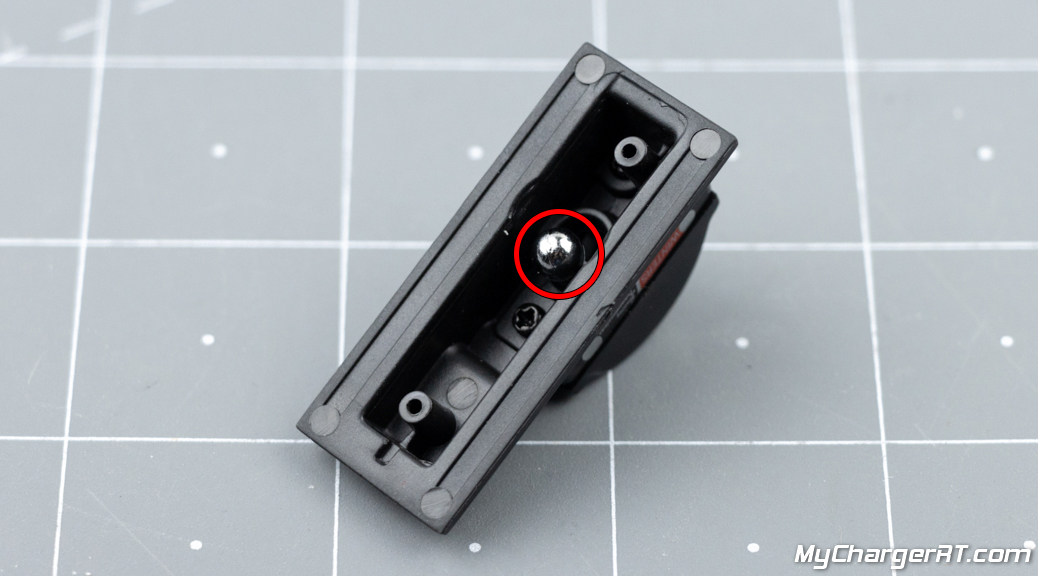 Slide the Gear Knob onto the exposed thinner end of the Gear Lever.

This takes a firm press, but will stay in place on its own just fine: 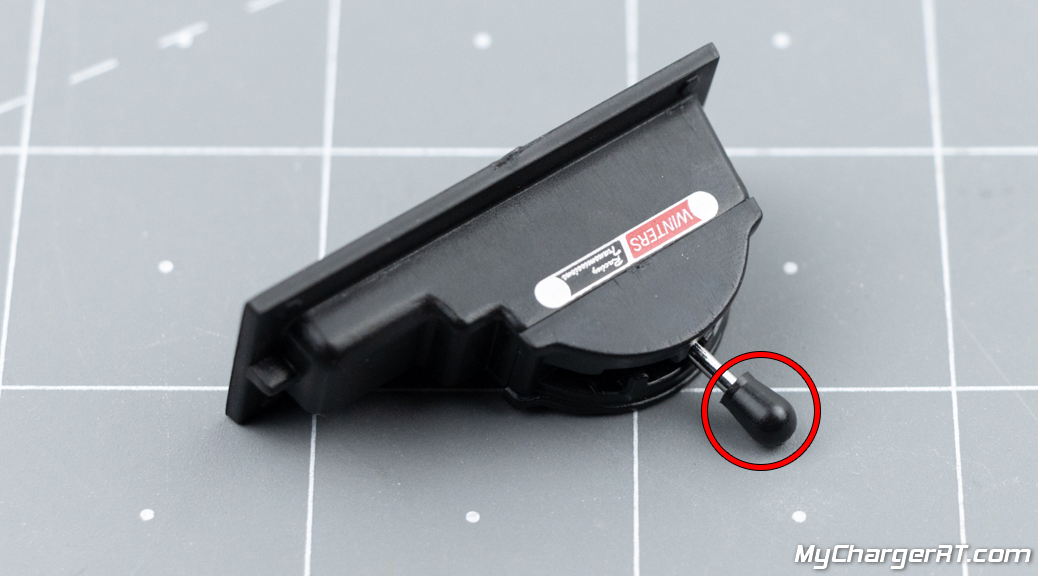 While holding the Gear Lever up inside the Centre Console, fit this assembly to the Floor Pan as shown:

There is an alignment pin at the rear of the Centre Console that fits into a locating hole on the Floor Pan. The raised circular ‘island’ of the Floor Pan will cradle the ‘ball’ end of the Gear Lever: 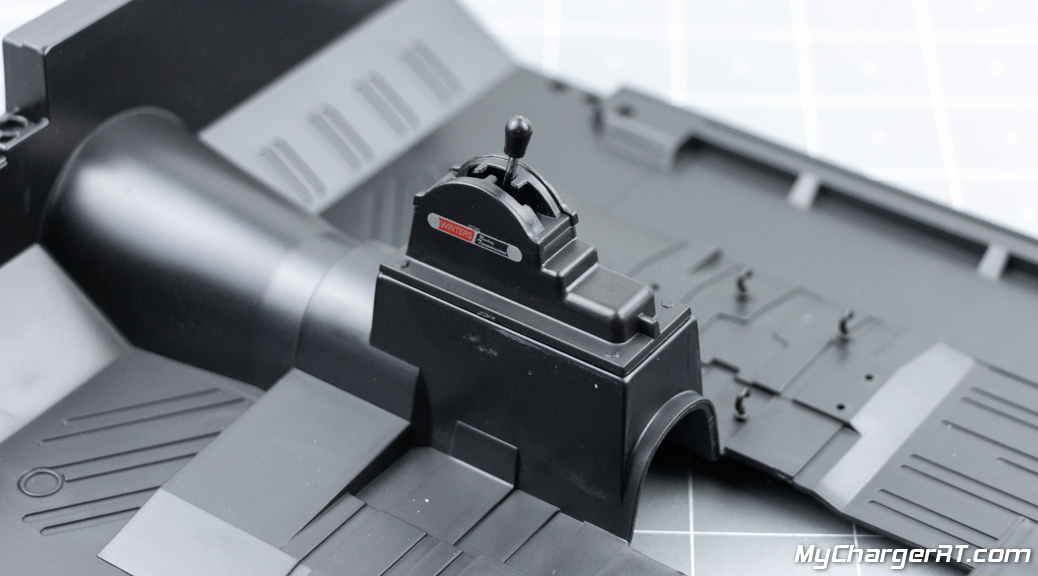 Secure the Center Console into place from below using two (2) AP screws: 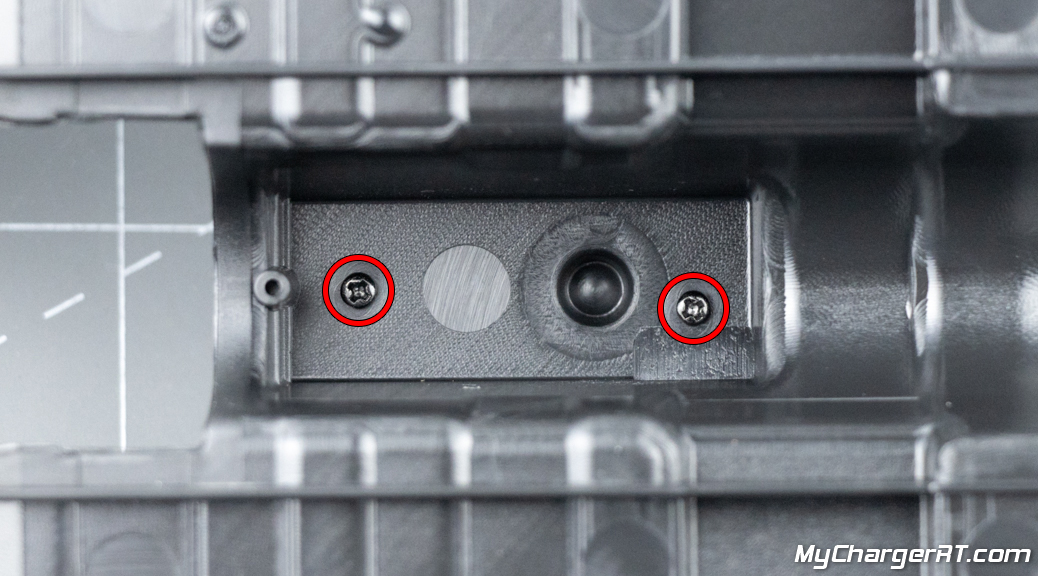 Fit the Middle Section of the Transmission Tunnel into the center opening of the Floor Pan as shown.

The instructions say to insert this into the opening from above, but it makes more sense to slide it up from below: 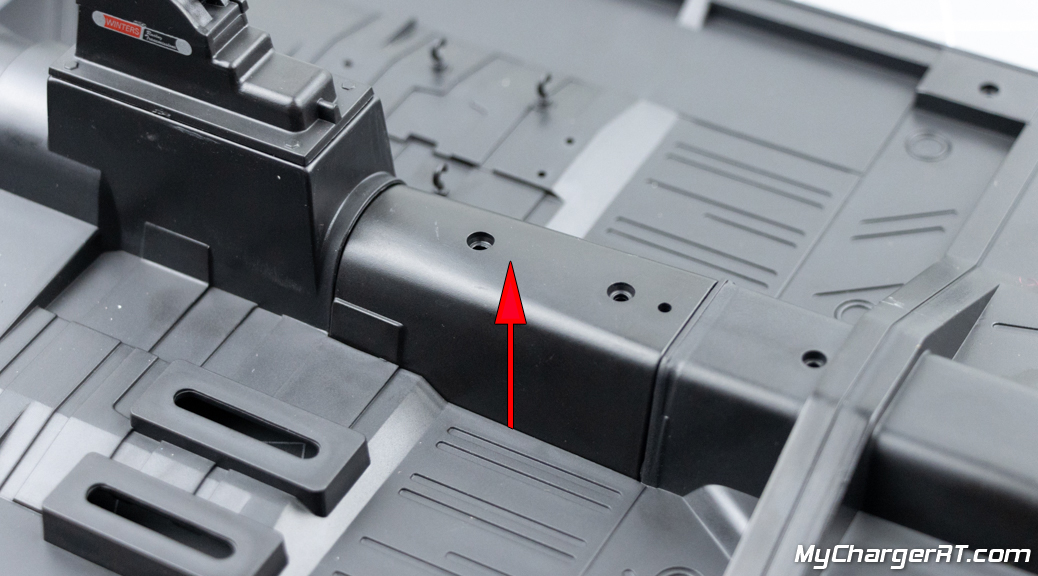 Secure the Middle Section of the Transmission Tunnel to the Floor Pan from below with two (2) AP screws: 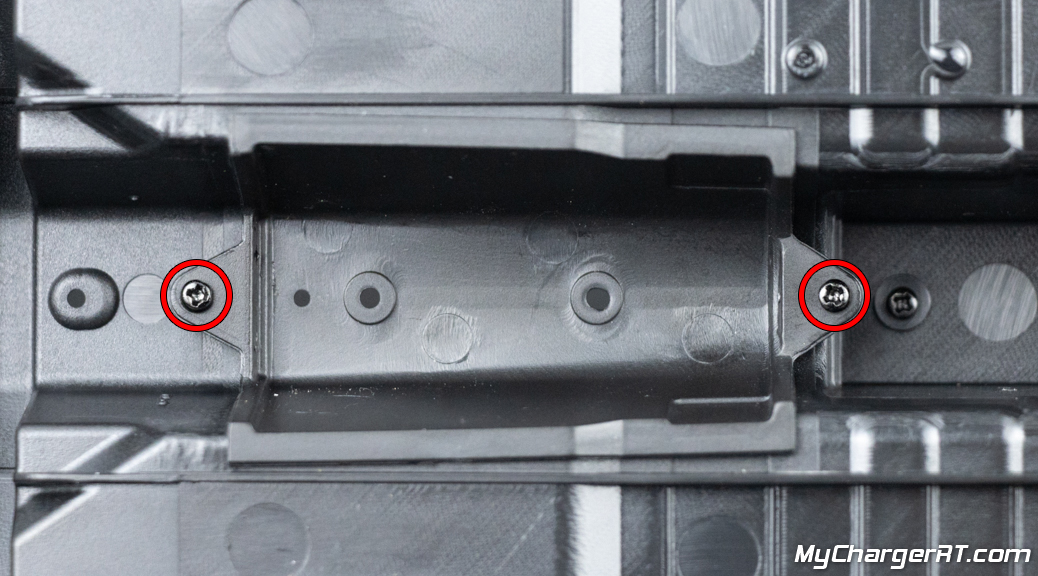 The shifter looks better than I thought it would, but it is still missing some details like the diamond plate base and the gear markings. Still, I enjoy productive, yet easy stages and this was one of them!