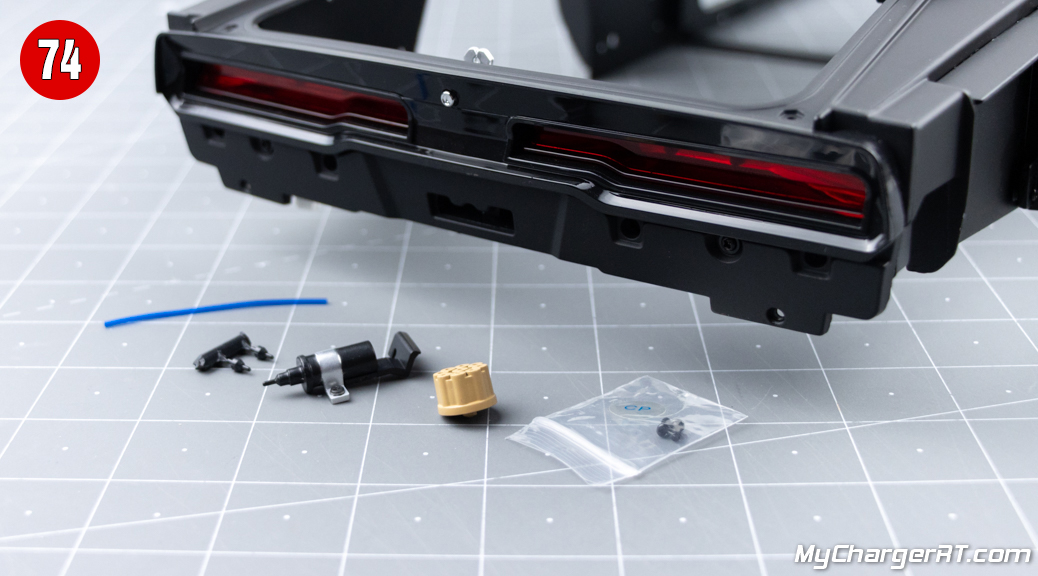 “In this assembly session you will install the rear lights of your model car.“

DeAgostini finally realized the Distributor Cap we installed back in Stage 16 was incorrect. That cap only had eight ports on it with no place to connect the Ignition Coil. Here, they included an unlisted replacement Distributor Cap and we will install it at the beginning of the next stage. Materials: All of these parts are plastic.

Retrieve your Chassis assembly and disconnect the Wiring for the LED Rear Lights (green/white) cable: The instructions are incorrect here. The LEDs on the shorter branch of the cable should be installed into the Left Rear Light, as shown. This will leave the plug on the left side of the car where it will connect to the wiring harness: The raised portion of the covers should be facing away from the housings: Retrieve your Tailgate Panel from the previous stage. Fit the left Rear Light housing into the matching recess on the left side of the Tailgate Panel, as shown.

I had to gently bend the leads of the LEDs down to make these housings fit flush inside the Tailgate Panel: Secure this left Rear Light housing to the Tailgate Panel from the other side with two (2) CP screws: In the same way, fit the right Rear Light housing into the matching recess on the right side of the Tailgate Panel, as shown: Secure this right Rear Light housing to the Tailgate Panel from the other side with two (2) CP more screws: Make sure the Wiring for the LED Rear Lights plug and cable are routed through this notch in the Tailgate Panel, as shown: Retrieve your Body assembly from the previous stage. Fit the Rear Body Panel to the end of the Rear Section of the Car Body, as shown: Secure the Rear Body Panel to the Rear Section from the inside with nine (9) PP screws.

It is easier to turn the Body assembly upside down on a soft cloth when installing these screws: Fit the Tailgate Panel assembly to the inside of this Rear Section, as shown.

Be sure the Wiring for the LED Rear Lights plug and cable is still in its notch and does not pinched or trapped: Secure the Tailgate Panel to the Rear Body Panel from the inside with four (4) CP screws: Further secure the Tailgate Panel to the Rear Body Panel from the outside with two (2) PP screws.

These two screws go in under the Tail Lights, one on each side as shown: Fit the Coil Bracket to the Ignition Coil as shown, and secure these together with one (1) QP screw: These tail lights are a beautiful deep ruby red so I hope my pictures do them justice! We did not use the High Voltage Cable, High Voltage Terminals, the replacement Distributor Cap, or the KM screws here. These will be needed early in the next stage, so keep them nearby.